Share Your Story
Blog Post
Businesses Are Struggling With A New Labor Problem: Fewer Teens Have Time For Summer Jobs

Janiya Hill is kicking off her second summer working at Pucker Lemonades & Beach Fries in Asbury Park, New Jersey. The 16-year-old is making $10.50 an hour — 50 cents an hour above the state’s new minimum wage — working the register and serving up cold drinks and fries to customers on the boardwalk. Working gives her a sense of independence as she heads into her junior year of high school.

“When I’m not in school over the summer I like to keep myself busy. Rather than go to parties like normal teenagers, I want to have a job, I want to work,” Hill said. “I want to have my own money.”

Summer jobs like Hill’s used to be the norm for teens, but now younger workers are juggling jobs with extracurricular activities from sports to volunteering and college prep, and businesses are finding ways to work around a stagnant teen labor force in an increasingly tight jobs market.

Only about 40% of teens ages 16 through 19 were in the labor force last summer, according to a CNBC analysis of data from the Bureau of Labor Statistics. That figure has remained stagnant over the past decade. In 2006, about half of teens were working, or looking for work, during the summer. In the early 2000s, the figure was 20 points higher than it was last summer. Last year, only about one-third of teens held a summer job. 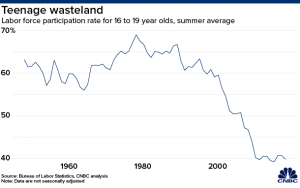 Hill works for Anthony Bannon, who employs about 38 teens ages 15 through 18. He has two boardwalk businesses in Asbury Park — Pucker and Tony’s, a sausage stand — which are open from May through October. He takes pride in giving teens their first experience in the workplace and diligently works on retaining them year after year. But Bannon’s has seen a shift in teen workplace dynamics in recent years and has had to change the way he recruits, bringing younger workers into the fold.

“We specialize in offering first-time workers the opportunity to learn how to get their chops and how to be a good employee — how to be a good team member,” Bannon said. “We’ve found over the last couple of years that 16- and 17-year-olds aren’t working as much. We’ve had to actually open it up to 14- and 15-year-olds using programs like working papers and working with schools.”

Summer enrollment in educational classes may be one cause for a decline in teen labor force participation, as the college enrollment process becomes more intense. In July 1985, which is the earliest year the BLS collected the data, about 10% of teens were enrolled in classes. In 2018, that number rose to 45%. Some say the shift may prove problematic for teens as they age. 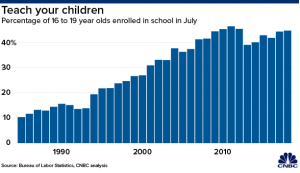 “Families are focusing now on education — getting good grades and being college-ready,” says Ellen Davis, president of the National Retail Federation Foundation. “Students are also focusing on athletics. … A lot of teenagers are opting out of the workforce, and many of them aren’t finding their first job until they graduate from college. That has huge implications, not only for businesses who are trying to hire young people, but also for young people who aren’t learning the skills they need to be successful in the workplace.”

McDonald’s is partnering with the AARP this summer to fill some 250,000 seasonal roles, the restaurant giant announced this spring. Meanwhile, other large employers, such as Walmart, are doubling down in recruiting teens with offers that include SAT and ACT prep courses — the exact conflicts that may be preventing some teens from working.

Mike Haines, owner of four Tropical Smoothie Cafe locations in the Atlanta metro area, said about 75% of his labor force of close to 100 workers is made up of teens. Getting teens in the door to work isn’t an issue for Haines, who is keen on keeping the younger workers he hires on board year after year, giving them opportunities to work into managerial and leadership roles. But he says their availability just isn’t what it used to be. 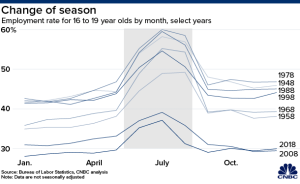 “The amount of hours they are devoting to work and the consistency of that availability is significantly different, even though we haven’t been dramatically affected by the number of teen applicants being reduced,” Haines said. “They’re doing things like volunteer work, they are engaged in their churches. They are looking at their extracurricular activities and taking additional summer courses, where previously the labor pool for summer students would have been much higher.”

In fact, Haines said given availability challenges he might have to hire one and a half workers for every one roster slot, which addresses retention, another major concern for employers in a tight labor market. Haines cited the open and clean environment of the smoothie cafes as one reason teens tend to flock to the stores for their first jobs.

“I think we are set up well to continue to attract high-quality teen applicants over the coming years,” he said, but he acknowledged there are potential headwinds for all employers looking to bring on teens down the line. “I do think that trends would suggest that there are some potential challenges ahead, not just for this industry but for everybody looking to hire from that teen labor pool, because we do see it shrinking.”