Share Your Story
Blog Post
Amid Coronavirus Outbreak, Nearly Three-In-Ten Young People Are Neither Working Nor In School

As COVID-19 cases have surged in the United States, young adults face a weakening labor market and an uncertain educational outlook. Between February and June 2020, the share of young adults who are neither enrolled in school nor employed – a measure some refer to as the “disconnection rate” – has more than doubled, according to a new analysis of Census Bureau data by Pew Research Center. Most of the increase is related to job loss among young workers.

At the beginning of 2020, the share of Americans ages 16 to 24 who were “disconnected” from work and school mirrored rates from the previous year. But between March and April, the share jumped significantly, from 12% to 20%. By June 2020, 28% of youths were neither in school nor the workplace.

While not the highest on record, June’s 28% disconnection rate – which translates into 10.3 million young people – is the highest ever observed for the month of June, dating back to 1989 when the data first became available. This trend is one indicator of the difficulties young people are facing as they transition into adulthood during a global pandemic.

It is important to note that some of the increase in the disconnection rate in June reflects the end of the school year around May. Even in a typical year, the share of students enrolled in school or college tends to fall between May and June because many young people do not enroll in summer school.

Most of the 8 percentage point increase in detachment from June 2019 to June 2020 can be attributed to coronavirus-related job loss among young workers, as the share enrolled in school has remained relatively stable, aside from seasonal patterns. 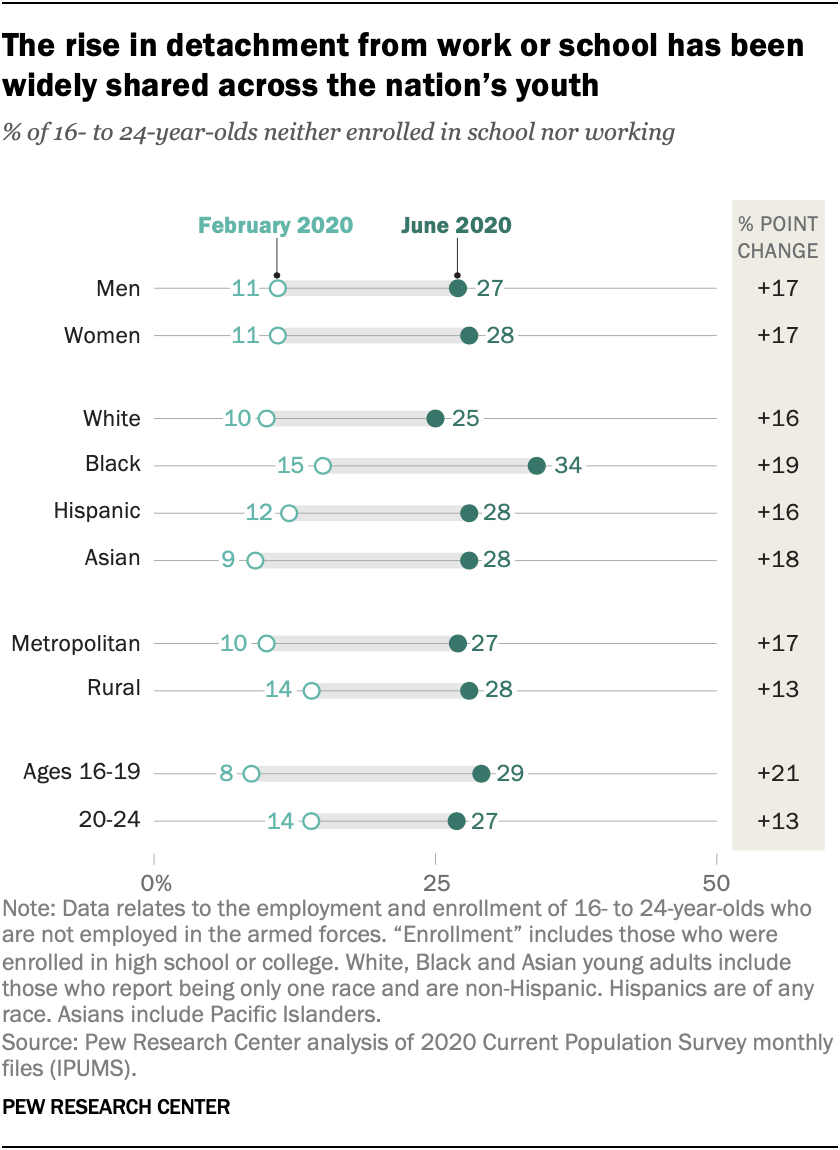 The steep increase in youth detachment from February to June is fairly widespread. It includes both men and women, each major racial and ethnic group, those living in metropolitan and rural areas, and high school and college-aged students (16 to 19 and 20 to 24, respectively).

The coronavirus has narrowed the gap in rural and metropolitan areas. In the last few years, young people in rural areas have been more likely to be out of work or school than their metropolitan counterparts. However, in 2020, the difference between rural and metropolitan youth has narrowed from a difference of 4 percentage points in February to less than 1 in June. One explanation for this might be that densely populated cities were hit first and have suffered higher infection and deaths rates than rural areas.

More than 4 million fewer youths were employed in June 2020 compared with a year earlier due to a large decline in employment. The share of youths enrolled in school or college in both 2019 and 2020 was 39%. Earlier Pew Research Center analyses have shown that young adults are among the most likely to have suffered virus-related job loss.